Gut microbiome as a tool in regenerative medicine; Novel approach driven by GN Corp Japan with potentials in neurological illnesses 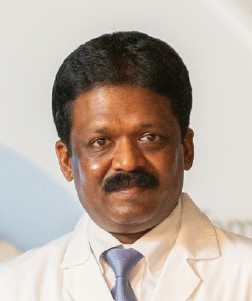 However, there exists another tool involving the gut microbiome (GM) which plays a significant role in supporting all RM tools both directly and indirectly (http://dx.doi.org/10.3233/JAD-220313). In Neurological diseases, one of the major causes is the aggregation of abnormal proteins causing inflammation and neurological dysfunction. A standard RM approach may have limited success unless the aggregations are scavenged. Enhancing the Microglia through GM scavenges and resumes homeostasis in the brain. The findings are based on clinical research (http://dx.doi.org/10.1136/bmjno-2021-000203) that established the influence of biological response modifier glucans (BRMG) to control GM, preventing aggregation and therefore propagation of abnormal proteins to the brain (https://doi.org/10.1101/2021.10.26.21265505).

Extensive research by the European Metagenomics of the Human Intestinal Tract (MetaHIT) and the NIH-funded Human Microbiome Project (HMP), which studied the gut metagenomes of 1,070 individuals, revealed the human gut to have 30 times more genes than the human genome. Thus, GM is viewed as the second genome of the body because of the extent of its functionality. 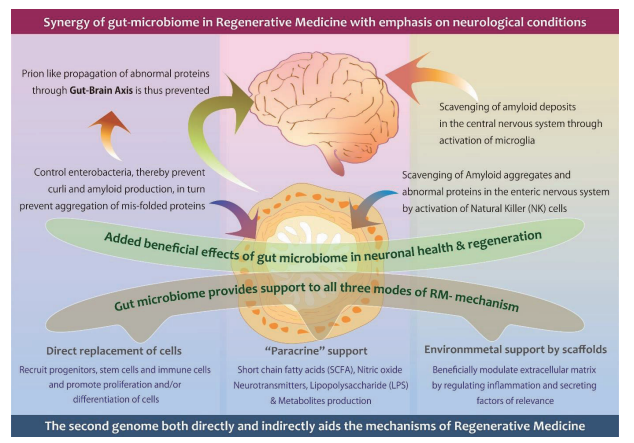 Photo Credit: This image is part of the publication, Preethy S et al. Integrating the Synergy of the Gut Microbiome into Regenerative Medicine: Relevance to Neurological Disorders. Journal of Alzheimer’s disease. 2022. http://dx.doi.org/10.3233/JAD-220313 – CC BY 2.0

Investigative procedures such as the 16S rRNA-encoding gene sequencing along with metagenomic and microbial transcriptome, proteome, and metabolome analyses have increased the knowledge of the human microbiome, including the gut. Healthy adults have more than 1,000 species of bacteria, with Bacteroidetes and Firmicutes being the dominant phyla. However, the health of GM differs in patients. Gut microbes release short-chain fatty acids (SCFAs) from indigestible dietary fibers. The SCFAs are the energy source for intestinal mucosa, and they are vital for regulating both the immunity and tumorigenesis in the gut. Other than the SCFAs, the GM produces many other microbial products such as uremic toxins, bile acids, trimethylamine-N-oxide (TMAO), SCFAs, lipopolysaccharides (LPSs), nitric oxide, vitamin K, vitamin B complex, gut hormones, and neurotransmitters which modulate metabolism and body function.

Studies have found a synergy between the gut microbiome and MSC-based regeneration, especially in the case of inflammatory bowel disease (IBD). Gut bacterial secretions control the cytokine gene transcription and surface protein expressions in MSCs. They also change the differentiation potentials and improve the immunomodulation ability of bone marrow MSCs. Nagashima and colleagues reported on the symbiotic relationship between a sub-epithelial population of MSCs and the gut microbiome wherein the former facilitates microbiome diversity and regulates IgA production. Other means to restore the Bacteroidetes/Firmicutes ratio, hepatocyte repair, and gut epithelial cell regeneration include MSC infusion and NOD2 sensors. Conditioning treatments such as hematopoietic stem cell transplantation (HSCT), chemotherapy, radiotherapy, and immunosuppressive therapy disrupt the gut microbiome. Valid strategies that work to counter the side effects include lactobacillus administration, probiotics, prebiotics, and fecal microbiota transplantation (FMT).

Further, a balanced GM is important to cardiac repair. Certain metabolites and microorganisms have been linked to the development of coronary artery disease (CAD) and atherosclerosis. A comparison between healthy adults and coronary patients revealed the presence of Helicobacter pylori, cytomegalovirus, hepatitis C virus, Chlamydia pneumoniae, and Porphyromonas gingivalis in the affected individuals. Also, the gut microbe population profile changes based on the disease type. For example, asymptomatic plaques have abundance of Porphyromonadaceae, Bacteroidaceae, Micrococcacaea, and Streptococcacaea, and symptomatic atherosclerotic plaques showed high levels of Helicobacteraceae, Neisseriaceae, and Thiotrichacaea. Other microbes causing heart disease are Escherichia coli, Klebsiella penumoniae, and Streptococcus viridans. While higher HDL has been associated with Firmicutes, Eggerthella being associated with decreased HDL cholesterol. Experimental studies on mice model have demonstrated that a reduction in Lactobacillus caused myocardial infarction (MI). Similar findings have been found in dose-dependent antibiotics treated mice, and dietary SCFA supplementation improved the physiological status and survival of mice. Post-stroke recovery improved with a healthy gut microbiome, possessing a higher abundance of SCFA-producing bacteria (e.g., Bifidobacterium longum, Clostridium symbiosum, and Lactobacillus fermentum).

The state of GM is reflected in the quality of bone health. Experimental studies on mice demonstrated that a 99% decrease in gut microbe, causing increased trabecular bone mass compared to the control mice. Lactobacillus reuteri probiotic treatment protected the mice from bone-mass loss.  Bifidobacterium longum and Lactobacillus plantarum treatment has been shown to reverse the blunted skeletal development of germ-free mice. Likewise, Pstpip2cmo mice predisposed to autoinflammatory osteomyelitis did not develop osteomyelitis by dietary modification of the gut microbiota.

An imbalance in GM can adversely affect the kidneys. Metabolites from an imbalanced gut comprising of urea, indoxyl sulfate (IS), and p-cresyl sulfate (PCS) cause abnormal activation of immune cells, and overproduction of antibodies, immune complexes, and inflammatory factors can damage the renal parenchyma. The probiotic L. Casei administration restores the SCFA-producing gut microbiome and nicotinamide metabolism has lowered blood pressure, ameliorated kidney disease, and prevented complications in chronic kidney disease (CKD) patients. Studies have shown a strong correlation between intestinal flora and diabetes, with an effective treatment strategy to counter diabetes being gut microbiome restoration.

To conclude, RM methodologies have come up with newer strategies, from cell-derived factors to pluripotent stem cells, which promote the paracrine effect by stimulating the damaged cells to regenerate. The donor cells do not have to persist to ensure a disease-free status.

Management of the gut microbiome should be an essential part of any RM process as it prepares the system to harness the full potential of sophisticated RM tools. The gut microbiome represents a group of cells that influence treatment outcomes. It not only plays a role in cell differentiation, proliferation, and paracrine effects but also influences tissue repair and regeneration. The gut microbiome even affects organs at a distant site, via its inter-organ axes such as the gut-brain, gut–lung, and gut–skin axis, to mention a few. Simple strategies like dietary interventions, lifestyle modifications, and safe food supplements such as probiotics and prebiotics can work wonders in promoting regeneration. The gut microbiome works ceaselessly starting from repair, inflammation, and tissue regeneration, and it continues to be present even after tissue maturation for homeostasis. It makes GM management indispensable for the success of any RM tool.

About the corresponding Author:

Dr. Samuel JK Abraham, after medical education and training in pediatric surgery in India, joined Yamanashi University for post-graduate training in Pediatric Cardiac Surgery and got doctorate. Founded GN Corporation (GNC) in 2002 in Yamanashi, Japan, and in collaboration with Japanese institutes in the domain of biomaterials and tissue engineering, in 2005 founded Nichi-In Centre for Regenerative Medicine and initiated stem cell research yielding cell therapy solutions in the specialties of ophthalmology, orthopedics and urology. In 2010, started multi- disciplinary clinical research on novel strains of biological response modifier glucans produced by Aureobasidium Pullulans to address unmet needs and rare diseases including neurodevelopmental conditions such as autism, genetic diseases such as Duchenne muscular dystrophy. GNC is undertaking translational research which compliment RM with emphasis on neurodegenerative conditions such as Parkinson’s, Alzheimer’s and neuroinflammatory diseases such as multiple sclerosis .

About Index of Sciences Ltd

Index of Sciences Ltd is a trusted and compassionate online science database that provides the guidance and tips you need to improve your health.

The post Gut microbiome as a tool in regenerative medicine; Novel approach driven by GN Corp Japan with potentials in neurological illnesses first appeared on PRUnderground.